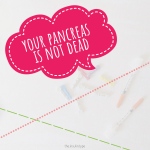 You’ve probably said it. And I’m also guilty of saying, “My pancreas is dead”. But is it true?

Even though type 1 diabetics essentially cannot produce enough insulin to live, it doesn’t mean that the organ that produces it, the pancreas, is dead.

One of the most compelling researchers who disproves the theory that the pancreas is no longer producing insulin, is Dr. Denise L. Faustman. As found in this article on page 2:

To our astonishment, when all weekly blood sera were analysed by an ultrasensitive C peptide assay at the end of the double-blind trial, all long-term type 1 diabetic participants— recipients of immunotherapy as well as placebo volunteers, even before randomisation—had low yet detectable levels of insulin secretion as measured by C peptide. We were galvanised to conduct a follow-up study of nearly 200 long-term diabetic patients in which we assayed C-peptide using the same ultrasensitive assay, which has a lower detection limit of 1.5–2.5 pmol/l. In this study, C-peptide secretion decayed gradually over the course of 20 years, not the 1–2 year honeymoon time course [14]. Also, patients with hyperglycaemia had higher C-peptide levels than those with normoglycaemia, a finding that indicated appropriate islet beta cell function.

When explaining what type 1 diabetes is, it’s easiest to say that the pancreas is dead, but it’s important to spread FACTS to raise awareness. The pancreas has MANY functions, and unfortunately, it cannot fulfill one of the very important ones.

Not only is it silly to spread misinformation on Type 1 Diabetes, like saying the pancreas is dead, its simply uneducated. There are people who’ve had their pancreas removed, and those with Type 3c diabetes.

Anyway, your pancreas is NOT dead.